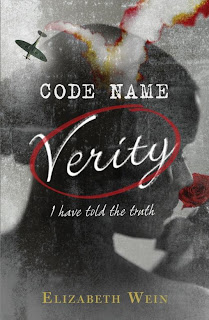 'I have two weeks. You'll shoot me at the end no matter what I do. That's what you do to enemy agents. It's what we do to enemy agents. But I look at all the dark and twisted roads ahead and cooperation is the easy way out. Possibly the only way out for a girl caught red-handed doing dirty work like mine - and I will do anything, anything, to avoid SS-Hauptsturmfuhrer von Linden interrogating me again.

He has said that I can have as much paper as I need. All I have to do is cough up everything I can remember about the British War Effort. And I'm going to. But the story of how I came to be here starts with my friend Maddie. She is the pilot who flew me into France - an Allied Invasion of Two.

We are a sensational team.'

Code Name Verity is an intricately-woven story of friendship, truth and lies. It is a deeply emotional book - it made me laugh, and it made me cry - as well as very thought-provoking, showing a glimpse of the ruthlessness of a side of war that we don't often think about - all the covert undercover work that went on behind the scenes.

Despite this, Code Name Verity managed to be a very entertaining read and I grew to really love the characters of Maddie and Queenie (not her real name, but several names are used for her in the book and I'm going to refer to her as this for the purpose of my review because it is the one that you know her by for the longest, I think.)

Queenie was just so dynamic and seemingly fearless - a real free-spirited character - and I think I viewed her with the same awe and admiration that Maddie probably did. Actually, I'm going to quote Maddie's description of her best friend because it is just perfect:

Queenie loves pretending and she's good at making up stories, which is why she is in the Special Operations Executive, and it's clear that she really is excellent at what she does (apart from the fact that '[she has] no sense of direction; in some of us it is a TRAGIC FLAW', which led to her being captured by the Gestapo after being in France for less than 48 hours, simply because she'd looked the wrong way before crossing the street.) Anyhow, this excellence of hers becomes even more clear at the end of the book! (I won't say any more because I don't want to spoil it!)

The first part of the book is Queenie's written account for her captors and her voice is so engaging and entertaining to read. In little chunks, she tells us hers and Maddie's story - a touching tale of true friendship. However, I must admit that I sometimes found bits of the stories from the past that Queenie was telling a little bit...boring, what with all the talk of aircrafts and flying and whatnot. (It's okay, though! It was only the odd occasion! And anyway, looking back, having finished the whole book, I can guarantee that it's worth sticking it out to get to the end!)

Anyway, Queenie's story was interjected with snippets from the present and what was currently happening to her. I, personally, found these bits more amusing in general. Despite the torture she's withstood or, as she euphemistically puts it, 'the, ah, stressful circumstances' she's been put through, her fire and fighting spirit remain and she stays, for the most part, chatty and upbeat. She has a tendency to forget she is not writing this for herself and the results of this are rather funny. For example, one time, after viciously insulting von Linden, the man for whom this report is being written, she suddenly realises and writes -

"Oh my God, why do I do it - again and again? I HAVE THE BRAIN OF A PTARMIGAN HEN. HE WILL SEE ANYTHING I WRITE."


Overall, Code Name Verity was a very enjoyable and moving read. Queenie and Maddie were such likable, real characters and they truly were a sensational team. Reading their story, I almost felt like I was there, a part of that sensational team with them.
And the ending was...perfect. Bittersweet, but I wouldn't have wanted it to end any other way. After reading this, I had that satisfied feeling of having just digested a really great book. Seriously, it's well worth the time.

In my opinion, the best line of the book was...(and I'm going to have to hide this because it's a MASSIVE SPOILER, so only highlight if you have read the book!!!) …
'She never told them ANYTHING.'


Maddie's realisation of what Queenie had really done made me so happy. And I admired Julie even more for being so clever. I have to say, I did wonder at times about the usefulness of the 'confession', but it all made sense at the end!
Posted by Catherine@thebookparade at 12:57