BOOK REVIEW: Caught in a Moment by Martin Dukes


Title: Caught in a Moment
Author: Martin Dukes
Published:February 2012
Pages:261
*Thank you very much to the author for providing me with a copy of this in exchange for an honest review :) * 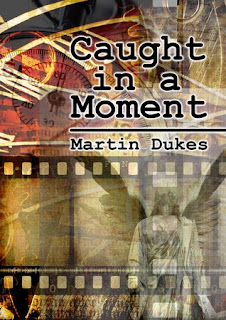 "Caught in a Moment is the story of Alex Trueman, a teenager who daydreams himself unwittingly into the strange world of Intersticia. This is a world outside of ordinary time, that exists in the slender intervals between instants. From Alex's point of view the world around him freezes into immobility. At first it seems the he alone is free to wander the hushed streets with their motionless cars and people. But he is not alone. Alex soon discovers that he shares the world with others. There are a few dozen fellow daydreamers who share his fate. There is plump, bespectacled Will, pretty brunette Kelly, and the rebellious outcast Paulo. Presiding over them all is the enigmatic Ganymede, and irascible vagrant who distributes food to his dependents and sets them perverse tasks to perform in return.

Alex soon finds that he has rare skills in Intersticia. Most uniquely he can affect the motionless world of 'Statica' around them. He can open doors, help himself to food, and move objects. But this forbidden activity soon sets him on a collision course with Ganymede in which the very existence of Intersticia is put at risk."

The first thing that struck me, from the very moment I began reading Caught In A Moment, was Martin Dukes’ writing style. I’m not quite sure what it was about it exactly, but there was something. I can’t quite put my finger on it. There was a kind of fluidity to the way the words seemed to roll off the page effortlessly, weaving together a story that was very easy and enjoyable to read.


What caught my attention about this book was the uniquely intriguing idea behind it – a world that exists in a frozen moment of ‘real time’? I have a personal fascination in the mysterious workings of time and space and frequently ponder ‘what-if?’ scenarios such as the one created in this book and so I was very interested to see how the idea would be executed in a novel.


And the great thing was, it came off really well! Somehow, the whole idea of this different strand of time and the concepts of ‘Intersticia’ (the parallel world Alex gets trapped in) and ‘Statica’ (the real world frozen around him) were explained in such a plausible way that I could almost believe they were actually true!


A delightfully diverse range of well-rounded characters graces the novel – from our protagonist Alex Trueman, a pretty realistic portrayal of an average teenage boy, who gets up to the mischief you would expect from anyone who suddenly found themselves in a classroom where everyone else is frozen, to the rambunctious Paulo who brings a touch of humour to the table with the jinx that makes him unknowingly yell the names of vegetables whenever he intends to say a swear word, causing him to say things like: “Peas! I don’t runner bean believe it. We’re like Robin turnip Hood or something.” A solid cast of characters id, of course, an important feature of any good novel - it is much harder to enjoy a book when one is not engaged by the characters.


All in all, an eclectic mix of magic and sci-fi, angels and parallel worlds, Caught in a Moment offers a refreshingly quirky, light-hearted read that I would recommend to anyone looking for something a little different, and unique, to enjoy.
Posted by Catherine@thebookparade at 14:51